Collector's Corner: Showing Off Your Love for the Sport: Jersey Collecting- Part II

This edition of the Collector's Corner was written by Avs fan and jersey collector, Nick Hopf!

Hello, fellow hockey jersey enthusiasts! My last article in Part I covered my collection that related to the Colorado Avalanche. In this section, I will show you all the ever-growing assembly of jerseys from other teams. 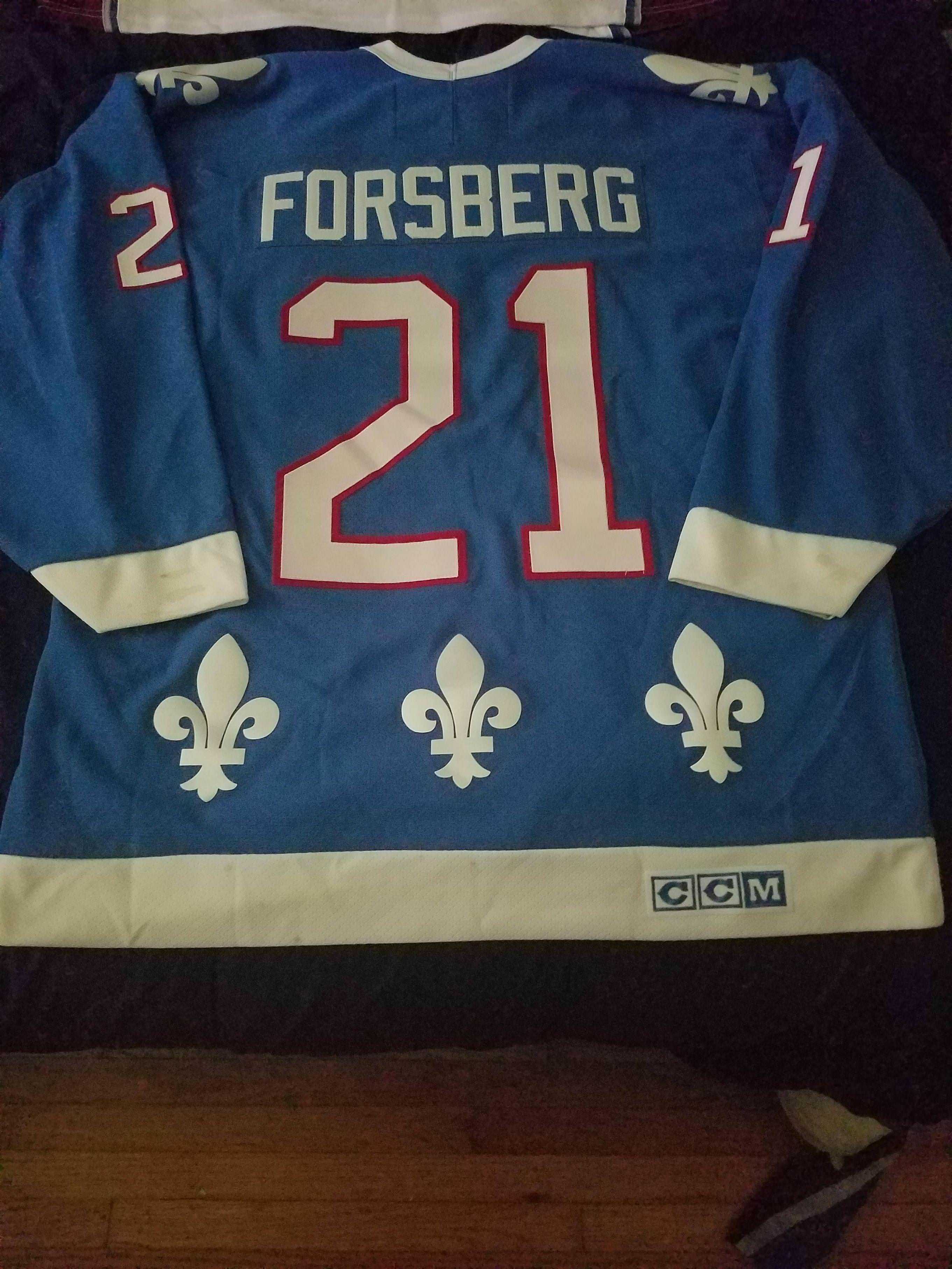 I will start off with the last one from the previous article, my Québec Nordiques jersey that displays the one and only, Peter Forsberg! Now, many of you would probably point out that Foppa only had a brief stint wearing this sweater because of the relocation to Colorado and that there are many other noteworthy names that should be worn. Regardless, he is one of the greatest players of all time in my book, and I had the opportunity to pick this up in Québec City this past summer (how fitting, right?). 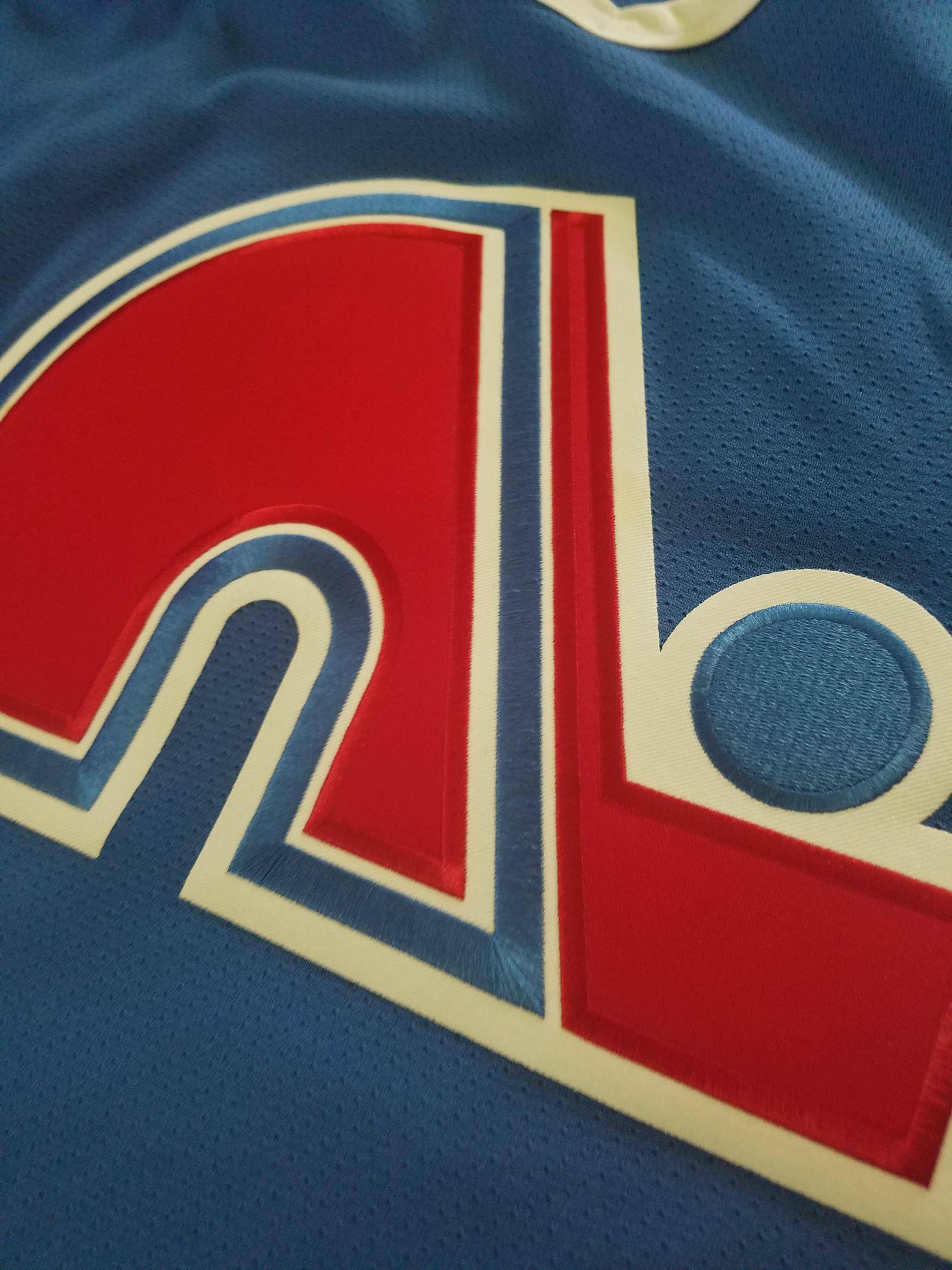 The jersey is a CCM Vintage Replica model, and the quality is superb all around. For those who are used to the Reebok and now Adidas models, take note that these jerseys are baggier in the arms and not meant to be figure fitting (which I personally love). There’s just something about these styles of sweaters that makes me feel nostalgic whenever I wear this jersey or another similar to it and makes me wish I lived somewhere where there was more ice and snow so I could go play pond hockey while rocking it. 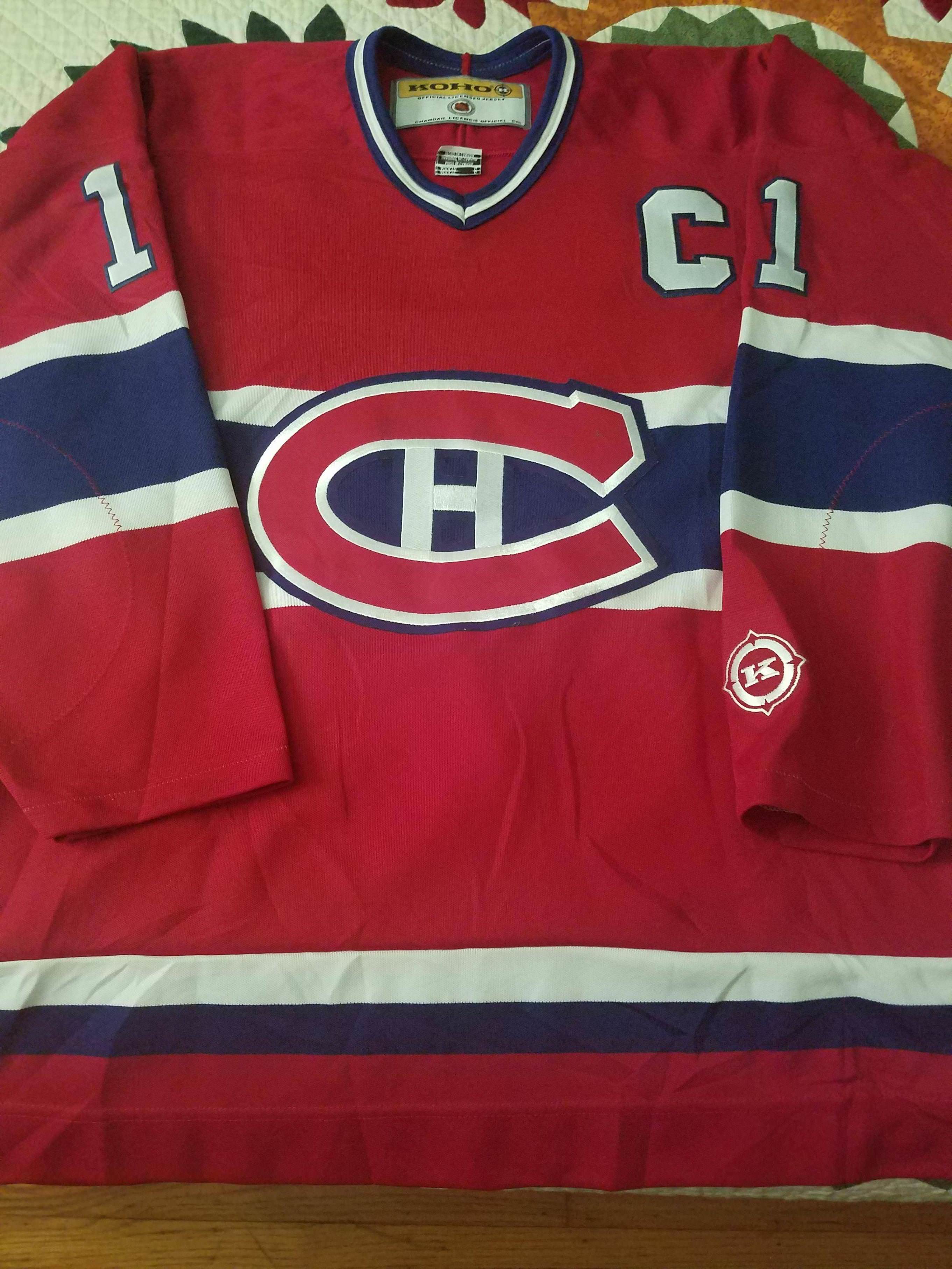 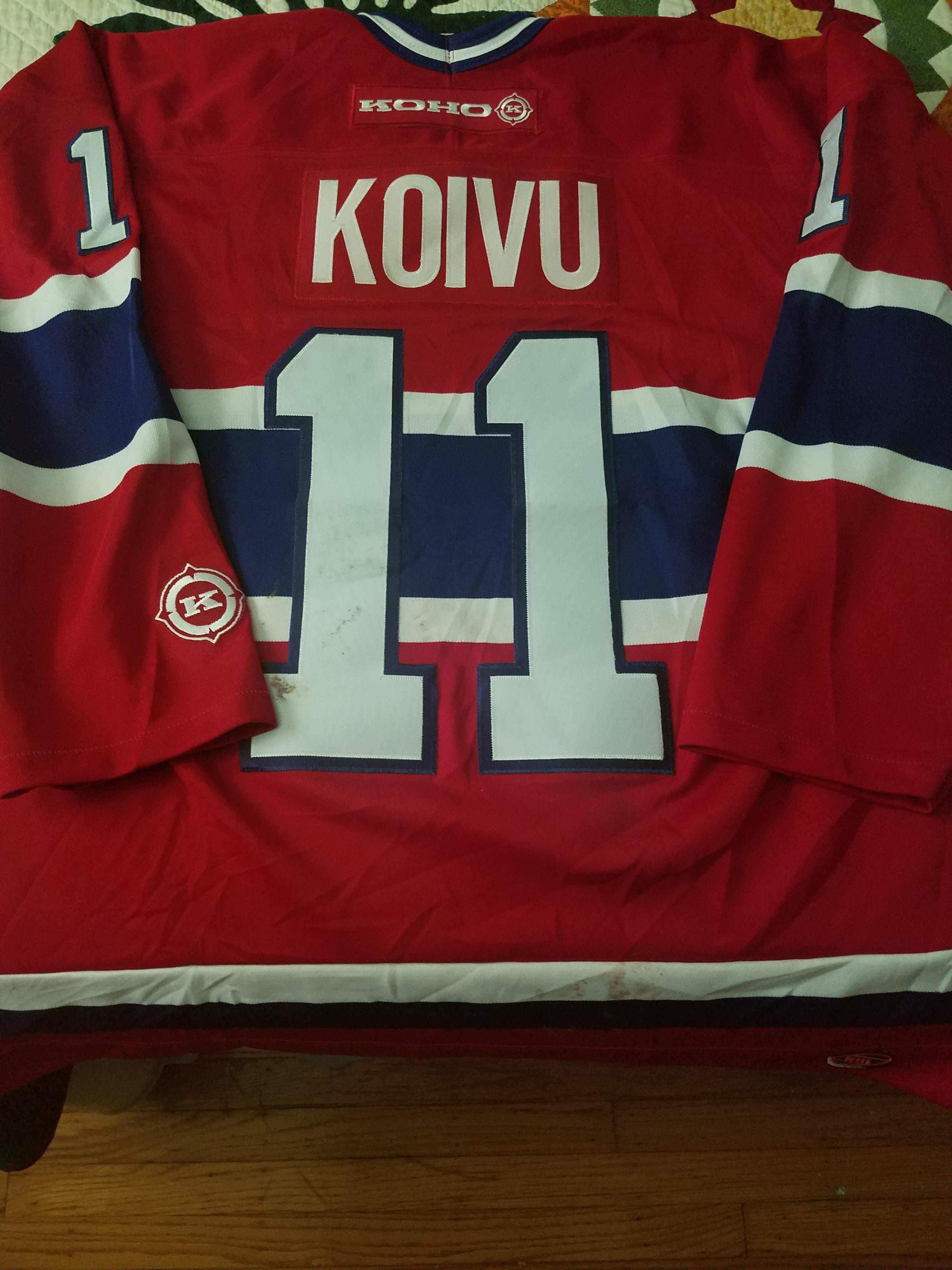 A discussion about the Nordiques cannot be complete without looking across the province at good ‘ol Montréal. I received this Koho replica from a friend for a good price, as he was not really interested in it and I offered to ease him of his burden (gasp!). It was even more of a steal for me because it has former captain Saku Koivu on it, who I admired watching when I was younger and becoming familiar with players around the league. Compared to my other Koho replica of the Avalanche third jersey shown in Part I, the feel is different. For one, it is by far the heaviest jersey that I have in my collection, and lacks that outer meshy feeling and look of ones like the CCM models. It is a size Large, yet the sleeves are so wide that I am tempted to put it over some goalie gear to see if it would fit. Regardless, it has become a nice addition and one that I am tempted to have framed and hung up. 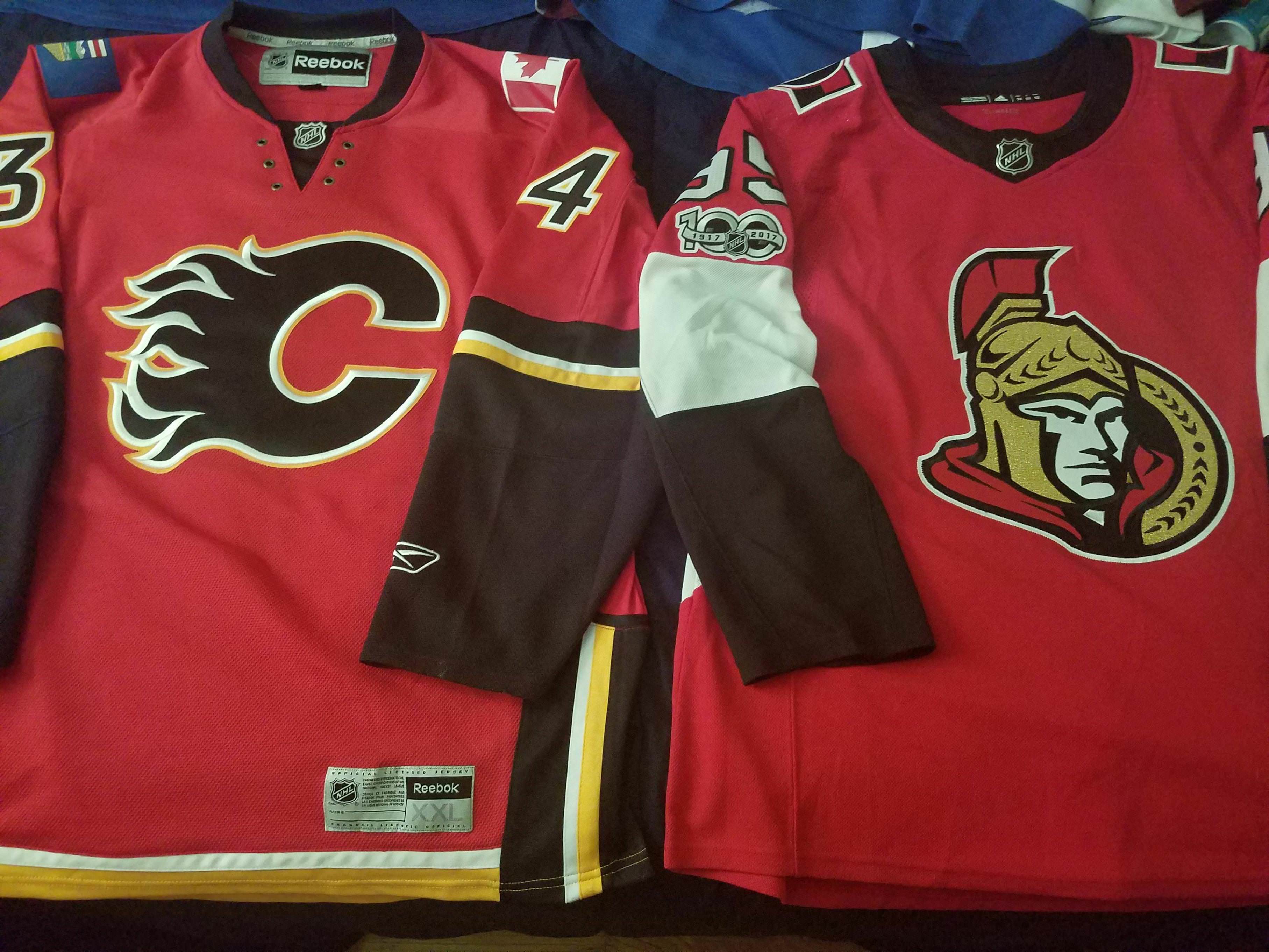 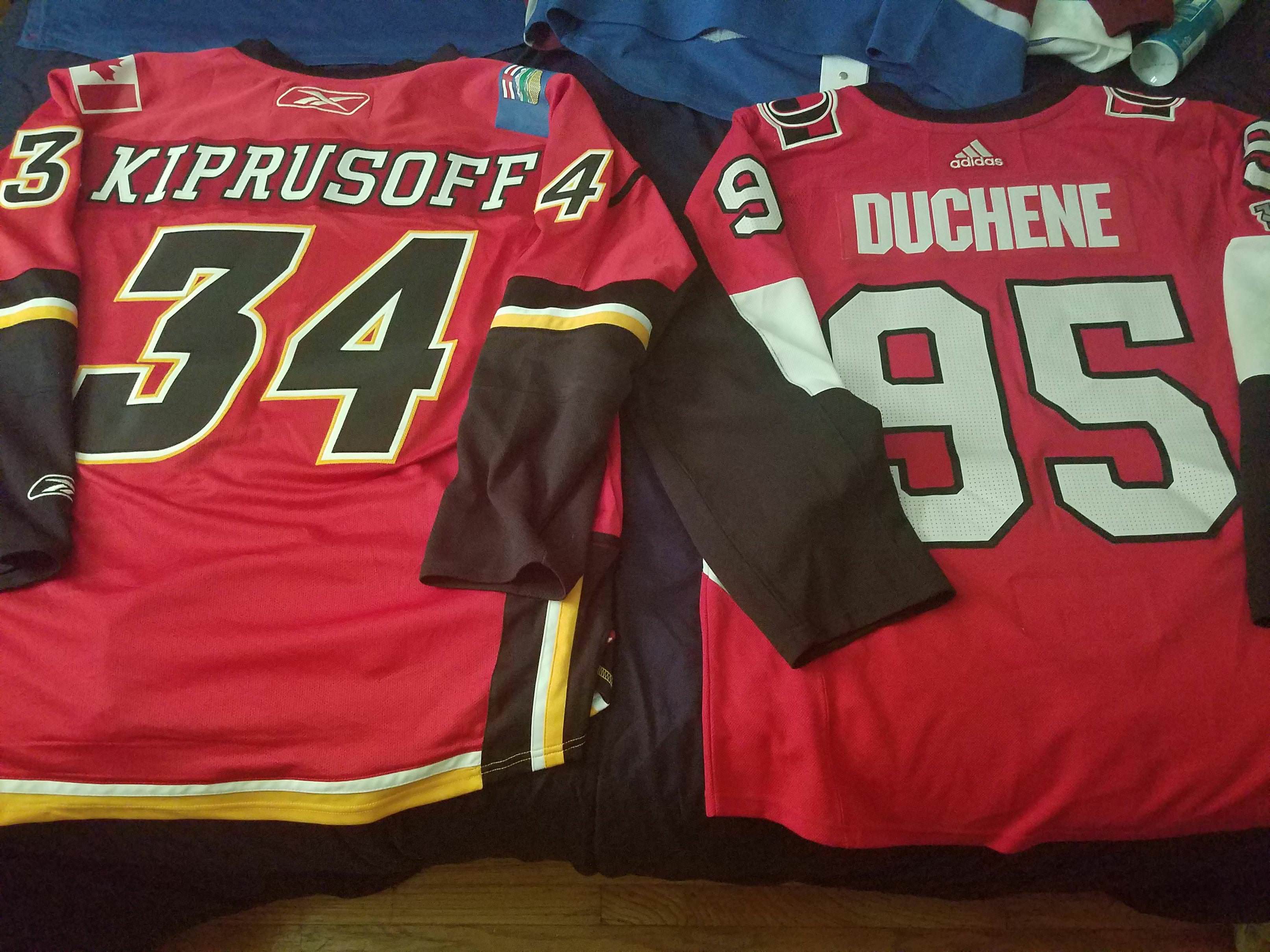 If it has not become obvious, I have a love for the Canadian cities and teams and want to eventually have at least one of each one day. This is where I really began to realize that I would begin collecting jerseys from other teams. To me, it is a way to not only show my admiration and respect for certain clubs, yet also to represent my love for the game. So let’s start off with the Calgary jersey. 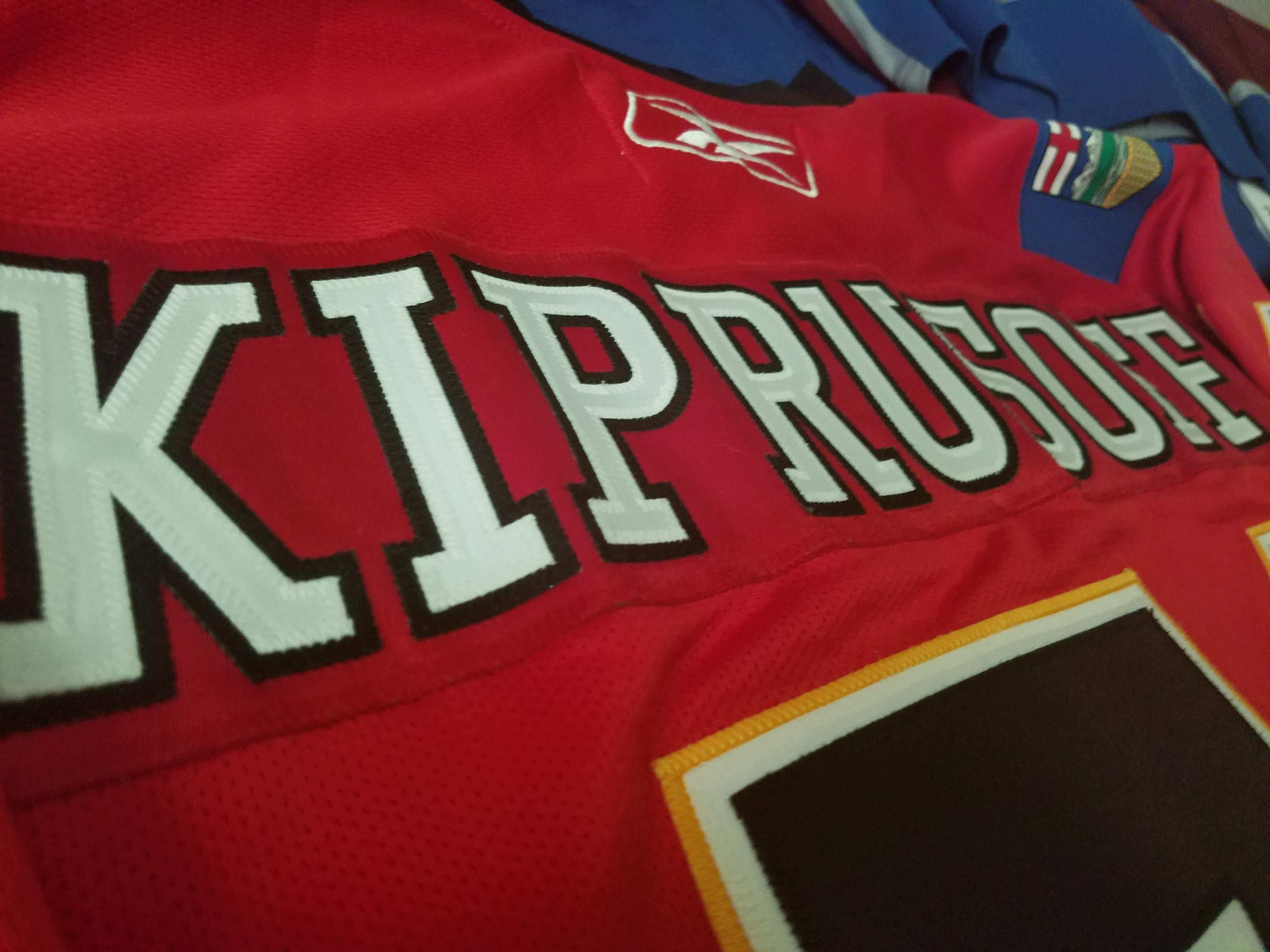 Growing up watching the Avs, I came to love the art of goaltending. While watching and mimicking the moves of Patrick Roy was an obvious result of my fascination with the position, there were other netminders that caught my attention. Enter Miikka Kiprusoff, who I believe is one of the most underrated goalies in his era. I came to adore his style of play, so much to the point I copied his stance and positioning as I became more involved with playing.

I picked up this jersey from CoolHockey during the sale before the transition to Adidas. I picked up a Reebok replica in XXL because I wanted to be able to use it occasionally in pickups (if I am going to make split or desperate stick saves, it’s even better when wearing this beauty). Once again, I have to applaud CoolHockey for the fantastic work on the stitching of the name and numbers. The material is high quality as always and has proven to stand up to lots of use, even when wearing it for actual games. 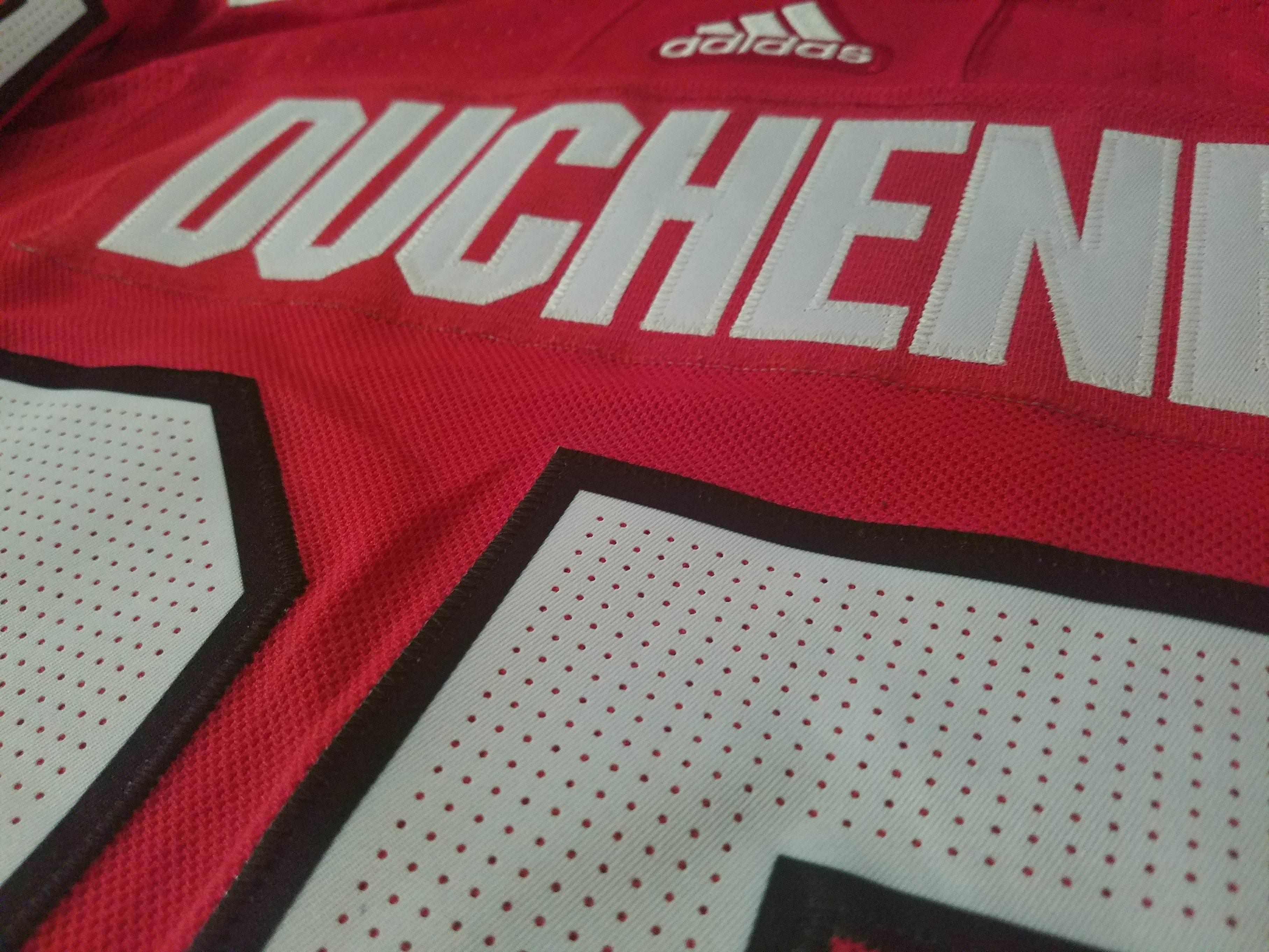 Oh now this is a funny story. We all know about the Matt Duchene trade, and the blockbuster that happened between three clubs. Now I am a big fan of Duchene and he is one of the first players I began following before he was drafted. I knew that his time in Colorado was coming to an end eventually given the youth movement, yet it was still bitter to see him go. Luckily he went to a team I have always enjoyed watching whenever the Avs are not on TV. I ended up joking with my family that since Duchene got traded, I now have an excuse to get a Senators jersey…guess what I got this past Christmas to my surprise (and take a guess from which distributor…if you guessed CoolHockey you must be a psychic! ;) ).

Once again I have to highlight the work done on these jerseys. It is the second Adidas Authentic that I now own, and I have to say that these models are really light and feel so nice to the touch. The model also has the NHL Centennial patch which was a nice addition and adds a bit of uniqueness to it. The nameplate and numbers are also wonderfully stitched on.

I got to rock this jersey during a visit to Raleigh to see the Sens play the Hurricanes and waved it around during the warmups. I ended up catching Duchene’s attention with it and got a laugh and smile from him. I am sure after all that he went through with the media and trade, it was nice to see a fan in a place outside Ottawa and Colorado supporting him. As he was the last one to step off the ice, he gave me thanks and tossed me a puck. That was a great moment and makes me really happy to have this jersey in my collection. This is definitely one that I will alternate with framing and casually wearing around town. 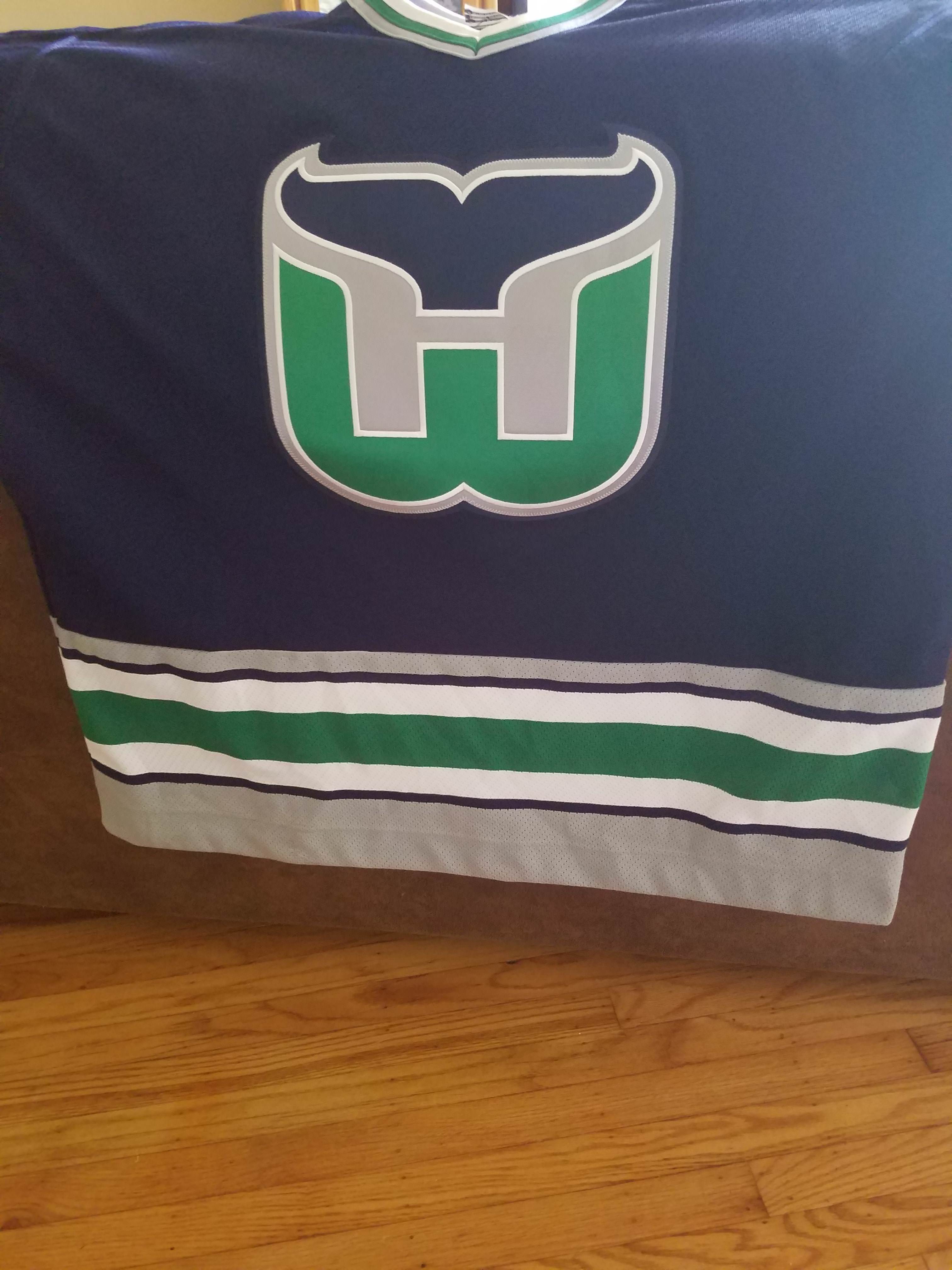 The final jersey in my arsenal (for now of course!) is from the Hartford Whalers. I ended up finding this one at the same time as my Nordiques sweater, and gave into temptation…I just had to have it! This is another CCM Vintage model, and has no name on it; one day it will potentially get some work done, I just do not know which player to add right now. Like the other CCMs, it has a nice baggy feeling, yet feels as light as a feather. This is a jersey that gets me high-fives and compliments from other fans whenever I decide to wear it for a game or for fun.

And that concludes my hockey jersey collection! It’s crazy how I came to be a proud owner of so much hockey memorabilia in such little time. Not only do they show my passion for the greatest sport on earth, they also represent some of the best memories I have had in my young life.

The big question now is what will be added to this growing collection of sweaters. Perhaps another Canadian team like Edmonton or Winnipeg. Maybe I will look to a Vegas jersey with Fleury on the back as a way to expand (see what I did there?). Time will tell, and I hope to eventually provide you all with another piece of what I have gathered in the future! Take pride in your jerseys!

Want to guest write for the CoolHockey blog? Check out this post and you could receive $50 toward your next purchase just for writing about jerseys!